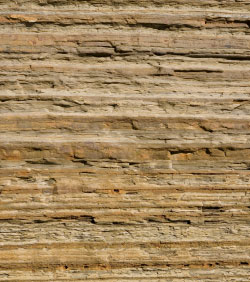 Natural gas, petroleum and coal formed millions of years ago from decaying plant and animal matter. This material was composed of marine animals, swamp vegetation, ferns and giant trees. Buried under countless layers of mud, sand and silt at the end of their cycles, these carbon-based life forms became part of the Earth. Aided by helpful bacteria and subjected to heat and pressure of the passing centuries, these elements of geology’s Carboniferous period have become the “fossil” fuels of today.

Consider constructing a geological timeline as a class project. The time frame discussed in Energy Underground sections concerning the formation period of natural gas and fossil fuels may prove too abstract for younger students without a visual reference.

It will be helpful to emphasize that other fossil fuels and natural gas are often found in similar locations because the same kinds of forces made each of them. Plant life plus small marine animals plus centuries of sediment combined often yielded fossil fuels. By illustration, if you obtain chunks of coal brought up from a mine before being pulverized, your students will have the opportunity to see all sorts of plant fossils. Though not fossil fuels, surface deposits of shale reveal similar fossils, with a trilobite or two thrown in if you are lucky, and limestone quarries reveal traces of embedded sea creatures and shells brought to light after thousands of millennia.

Now that we know what natural gas, petroleum and coal are, here is what they are NOT. Fossil fuels are not the product of dinosaurs, no matter what the advertising and popular culture would have you believe. Dinosaur eras, said to have been in the Triassic and Jurassic geologic time periods were much more recent events.

Methane – by any other name 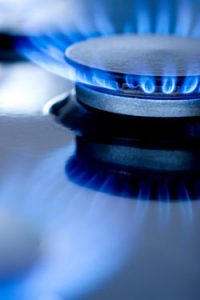 Apologies to Shakespeare, but natural gas is composed mostly of methane, with a few other hydrocarbons thrown in – such as butane, propane and ethane. By composition, it is the cleanest burning of all fossil fuels, leaving no particulates as do coal or oil, and very little carbon dioxide. When burned, natural gas breaks down to basic elements including carbon dioxide and water vapor.

The methane in natural gas is also an element of the Earth’s atmosphere, the result of natural processes such as plant decomposition. Methane has the nickname “swamp gas” or “marsh gas.”

Oil companies once burned off natural gas, considering it  a useless byproduct of drilling. Today it has become the responsible fuel of choice for 60 million Americans who use it to fuel their lives.